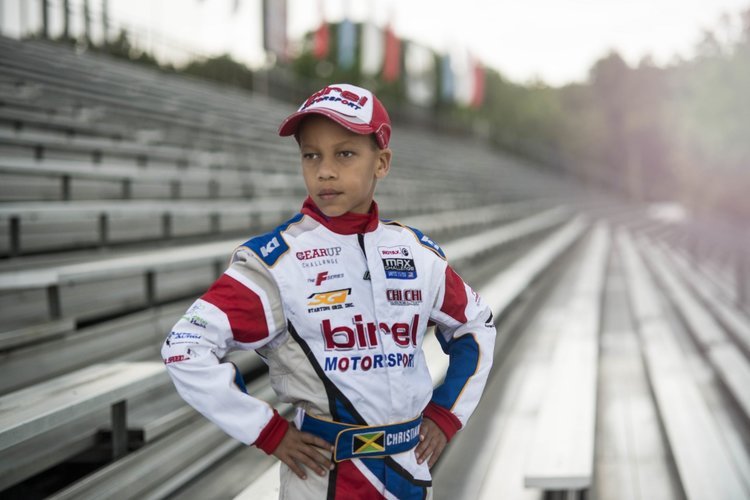 This month’s WKA #RaceLife Spotlight racer is 11 years old and has been into cars since he was 3. A very passionate racer, Christian Rutty started racing in 2012 in the Kid Kart class and has since advanced in the Manufacturer’s Cup series. He is always willing to help other racers and has a positive saying he goes by, “Safety first and see you at the finish line!” With an IQ of 147, this racer is not only sharp on track, but in the classroom as well! While a win has been fairly elusive for him, Christian often finishes in the top 10 and has a great attitude, which he highlights in his own website, www.kidzspeed.com. Read more about Christian below: 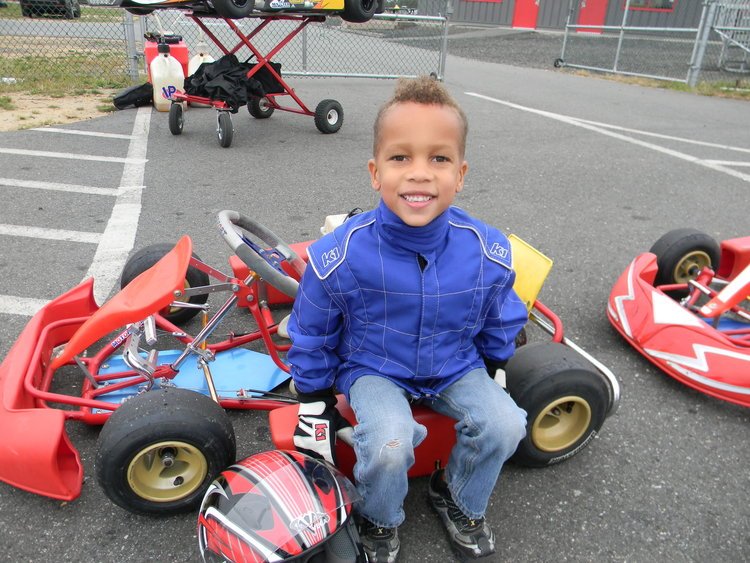 HOW LONG HAVE YOU BEEN RACING?
Since Spring 2012, in my Kid Kart.

HOW DID YOU GET INTO RACING?
At 3 – 5 years old, I would look at car magazines, as well as watch YouTube videos of exotic cars online. At 5, I got to see an Indy Race up close (The Baltimore Grand Prix), Labor Day Weekend 2011 and once I heard those engines roar by at 200+ MPH, I knew I wanted to do it myself. My Dad researched online and found a 2-day, Pee-Wee, Intro to Kid Karting Class at NJMP. It was the most fun I’d ever had. Next Spring 2012, my Mom & Dad bought me an early Birthday gift, a used, red, Birel, Kid Kart and I began racing at Englishtown Raceway Park. That first season, I met older WKA racers, Tyler & Conner Ferris, Ryan Raffa and Nick Landi.

WHAT IS YOUR FAVOURITE PART OF RACING?
The difficulty and precision involved is what sets racing apart from other sports. The feeling of accomplishment after you’ve improved on lap times, or learned a new technique or made the podium, is the best feeling. It is an amazing feeling to be satisfied, exhausted, pumped up and euphoric at the same time.

WHAT ARE YOUR GOALS FOR THE FUTURE?
I have finished most of my WKA races in the Top 10, but have never made the podium as yet. The closest I came was 5th place at Pitt last May after the rain storm and I Qualified P2 in Jacksonville last February. My immediate goal is visualizing myself running my best race and being on podium soon. I also want to analyze more of my racing video footage and Mychron data at home by myself. 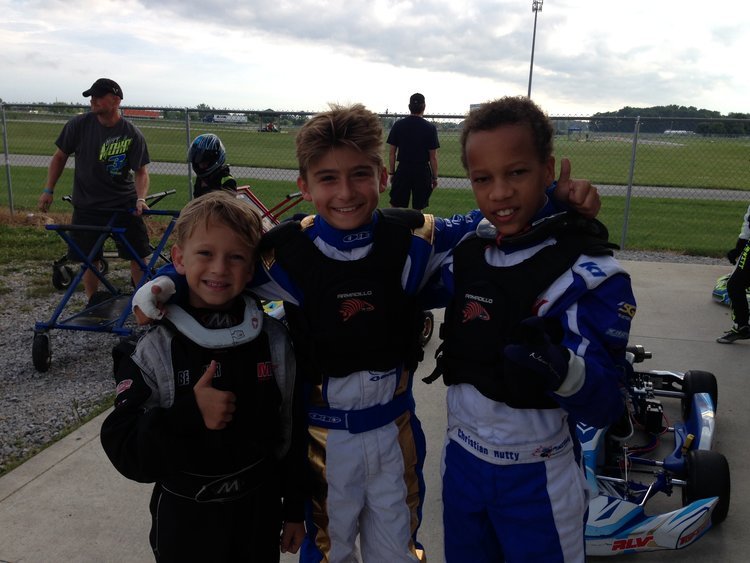 DO YOU HAVE ANY PRE-RACE RITUALS?
Mostly getting focused and getting the racing line down as best as possible. The start, passing or battling, can only take place on track, so I try to remember how to do it better from previous races. Remembering my coach’s instructions is the most important ritual.

WHO IS YOUR FAVORITE RACER?
No one on the planet can drive like Ayrton Senna did. Obviously, in F1 today, I love to watch Lewis Hamilton, because he drives great, plus I’m told I resemble him. Daniel Ricciardo is a great driver, and a position bandit. He can steal any race at any moment with his late braking superpowers. I’m a big fan of Sebastien Buemi and Lucas DiGrassi in Formula-E. Of course, I admire fellow Kart racers like: Anthony Gangi Jr., Ben Cooper, Dylan Tavella, Tazio Torregiani, Matt Solarczyk, John Bonanno and Brandon Jarsocrak.

WHICH TRACK IS YOUR FAVORITE?
When I was 6, on vacation, I got a coaching day on the island of Jamaica at Palisadoes Raceway. That track is literally a mini peninsula, next to the runway at Kingston airport and has coconut trees lining the chicanes. It is so cool to come down the straightaway, while a 737 jet is landing a ¼ mile away, parallel alongside of you! GoPro Motorplex is probably my second favorite track because of the layout and the history with Parma. The NJMP 1.03 mile Tempest layout is the first track I’d ever driven on and it’s almost like a rally race through the countryside. The straightaway at Jacksonville Winter Cup was so fast, I hit almost 70 mph in Micro Swift. Each track has its own personality, including New Castle where you spend most of your time bump-drafting or F1 Outdoors Boston’s banked turn, or OVRP’s new layout, which is extremely technical! 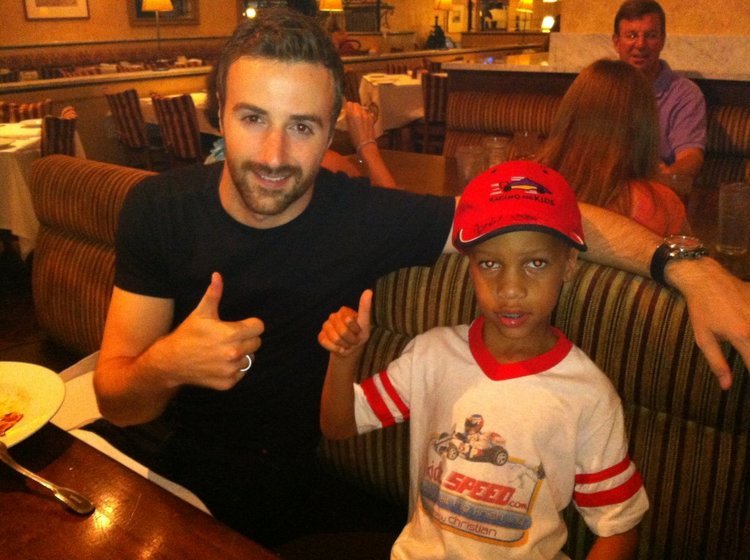 WHAT DO YOU LIKE ABOUT WKA RACES?
I like the family atmosphere, the race officials and the overall camaraderie. I appreciate that they have a quick Sunday worship service before qualifying. Even though it’s intensely competitive, if a driver’s engine is unable to start on the grid, you always see at least 4-5 Dads crowded around that kart, helping to get that driver going! At WKA races, there’s a mix of very fast kids, kids who compete regularly in the series and a few new kids on track. In 2016, my coach-tuner, Michael “Chi Chi” Ramirez recommended I add an IAME Micro Swift to my second chassis and start the WKA season at GoPro Motorplex. I had never been to a National race, other than a local club or regional Rotax race before. My whole family came to my first WKA race that April and I finished 7th on Day 2 and made a lot of new friends (Sofia, Hunter, Mateo, Alex, Hoyt, and Armand). I also like that I compete against other kids on track, but after our race is over, we all ride scooters, play manhunt or play video games together.

WHICH WKA RACE SERIES DO YOU RACE?
Manufacturer’s Cup, starting our 3rd season now. I’ve been to all of the WKA tracks except Wisconsin and Chicago. I also raced in two of the WKA Winter Cup races in 2017. That season, Daytona was a HUGE field with almost 34 karts and we had so much fun racing in Jacksonville!

WHAT ELSE DO YOU DO BESIDES RACE?
I have a syndicated web site, called KidzSpeed.com. I started it for fun when I was in Kid Karts, just interviewing other kart racers at the track. From there, I got to interview Indy drivers, a few celebrities, and it took off from there. I still do interviews. My two most recent were The Jetman (jet wing flyers from Dubai – very cool) and last month I toured NASCAR team, Joe Gibbs Racing facility in N.C. The major articles and interviews are on my website, KidzSpeed.com. More regular content and WKA race photos are on my KidzSpeed Facebook and YouTube pages. In addition, I’m a Boy Scout, I play alto saxophone, I run the 100 meter and I LOVE to ski. 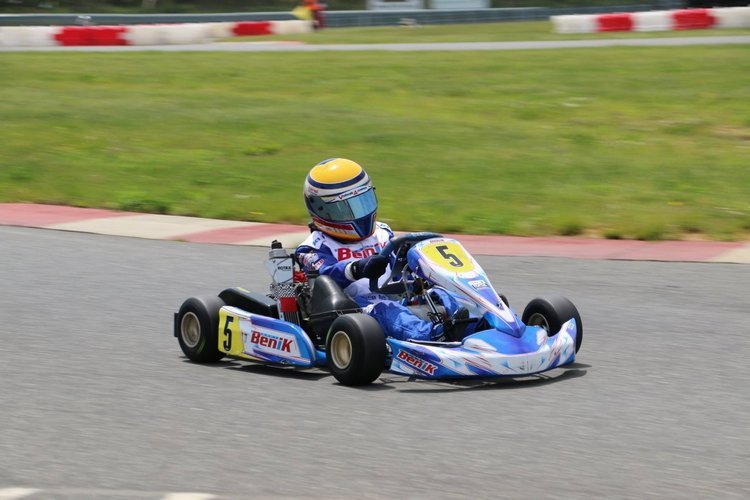 WHAT DO YOU WANT TO BE WHEN YOU GROW UP?
Of course, I’d love to make it to being a Formula 1 or Formula–e driver. I am a huge open wheel fan. In addition to racing, Because I love my STEM classes at school most, I see myself going into some type of engineering technology, tied to nanotechnology, electro-hydrogen powered engines, aerodynamics, carbon fiber design, or maybe even Formula E’s Roborace. Every year, I go to RaceCraft One in Indianapolis for simulator training and I really am impressed by the software, telemetry and capabilities the simulator can duplicate. I am most fascinated by the blending of science plus human element around predictive analytics and Artificial Intelligence for race outcomes.

ARE THERE ANY OTHER INTERESTING THINGS YOU WOULD LIKE TO SHARE WITH US?
Racing is a nice release for me because school takes up a LOT of my time, as I am labeled “Profoundly Gifted & Talented” (IQ=147) which means I take really some hard classes for my age. I’m in 6th Grade and next year I will take Algebra 2/Pre-Calculus, Physics and STEM Robotics. I was scheduled to be on LifeTime TV’s, “Child Genius, Season 2” – the camera crew was scheduled to film me racing at a track, but due to their rigorous competition schedule of back and forth between L.A..and home, my family had to defer until the next season. I’m supposed to graduate high school and start college by age ~16. Truthfully, I love learning cool, new things in school, but I most like being a normal kid, playing video games and racing my go karts. The most important thing about karting is to always “have fun” – first and foremost! My tag line on KidzSpeed.com is “Safety first and see you at the finish line”